Great news Prof. Walter Zaryckyj is coming back, this time to talk about the Ukraine / Russia crisis and why Ukraine matters and should be actively secured from harm.

(1) Allowing Russia to further truncate or possibly dismember Ukraine (a founding member of the UN) would do to the United Nations what the slow motion dismantlement of Czechoslovakia ultimately did to the League of Nations in 1938-39; the rubble would most likely not bounce this time.

(2) Allowing Russia to make further inroads into Ukraine would remind all newly minted or aspiring nuclear powers (N. Korea, Iran, Turkey, Saudi Arabia) to avoid non-proliferation accords (such as the Budapest Memorandum) like the plague.

(3) When Ukraine controlled Crimea, the peninsula was a nuclear weapon free zone (as per the mentioned Budapest Memorandum); with Russia exercising 'de facto' sovereignty over Crimea (and with a probable grab of the water rich nearby Kherson province set to reinforce that fact), the territory could soon harbor nuclear weapons (or be prepared to become such a harbor).

(4) The capture of large portions of the Ukrainian Black Sea coast would threaten to turn a body of water with three NATO states (Romania, Bulgaria, Turkey) and two aspiring NATO States (Georgia & Ukraine) on its shores into a Russian lake (ozero).

(5) Turning the Black Sea into a Russian ozero (looking south) would force a long-time (if not always well behaved) NATO ally like Turkey to seek its own accommodation with Russia.

(6) Given that Turkey might finally give Russia free reign through the Bosphorus (certainly the end of the Truman Doctrine benefits and possibly post Montreux in texture), the Eastern Mediterranean (with allies Israel and Jordan) would be exposed to new RU adventures.

(7) With an estimated 5-7 million Ukrainians likely on the run and major transport facilities in ruins, Ukraine would automatically stop being a major global supplier of foodstuffs. As Ukrainian Minister of Defense Reznikov has pointed out, Ukraine's disappearance from the worldwide food marketplace would not only disrupt the global food supply chain, it could trigger famine in the poorer areas of the world.

We will have a 30 minutes Q&A session after the talk. 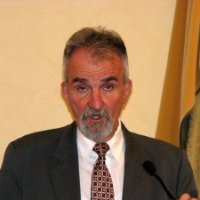